A Facebook survey scam currently targeting the social network’s users tries to lure them in by promising to deliver a video of a CBS newsreader that has supposedly suffered a stroke while she was reporting live from the Grammy Awards.

Still available on YouTube, the video spread virally across the Internet and scammers realized they have the perfect thing to draw in victims. And is there an easier place to perpetrate such a scam than Facebook?

“Omg this reporter had a stroke on live tv check it out [LINK]” – said the message that kept popping up on the victims’ profile. Those who made the mistake to click on the shortened link were taken to a page requesting them to give a rogue Facebook application by the name of “Reporter Stroke” permission to access their information and post to their Wall: 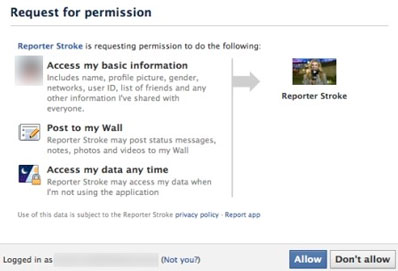 The application immediately posts the same luring message to the victim’s wall, but the video is still not available. To access the content, the victim must – of course – complete a survey.

Whether the victim actually gets to see the video in the end, Graham Cluley doesn’t say. Either way, the deed is done, and the only thing left for the victim to do is to revoke the permission to the rogue application by deleting it and to clean up his or hers profile of messages it left.