Taking advantage of the fact that a lot of security companies are more relaxed over the weekend, cybercriminals use the opportunity to strike.

This weekend, the popular auto trading site Autotrader.co.uk and the cinema site Myvue.com both served ads that redirected the browsing user to malicious Web sites laden with exploits – a phenomenon also known as malvertising.

The Web sites themselves weren’t compromised but were serving ads from an ad provider called Unanimis that led browsing users seamlessly – in the background and without their knowledge – to exploit sites.

Unanimis serves ads to thousands of Websites and we’ve received reports that ebay.co.uk and londonstockexchange.com were also affected by this malvertising campaign. One of the advantages that cybercriminals enjoy with malvertising campaigns is that they can be easily spread across a large number of legitimate Websites without directly compromising those Websites, but indirectly through the use of a malicious ad.

Let’s take a look at an example from Autotrader.co.uk. Here is an image that captures what happens in the background when a user searches for a car with any desired criteria:

The first step is the URL that the user is browsing to when searching for a car according to his/her desired criteria: you can see that as part of the URL it has the postcode (blurred), the price range etc. In the background Autotrader.co.uk loads some advertisements from some ad providers. At step 2 it loads the advertisement from a legitimate ad provider called Unanimis.

The exploit site is heavily obfuscated and serves several exploits that target Internet Explorer, Adobe Acrobat Reader, and Java. We observed that the exploit kit used is very similar to an exploit kit called “Blackhole”.

The dropped file installs a rogue antivirus on the user’s computer – the software tells users that their computer is infected and offers a “cleaning antivirus” for $59.95. In the meantime the software disrupts the use and ordinary functionality of the computer by hogging CPU power, displaying disturbing pop-ups and more. The dropped file has low detection rate.

The rogue antivirus that is installed: 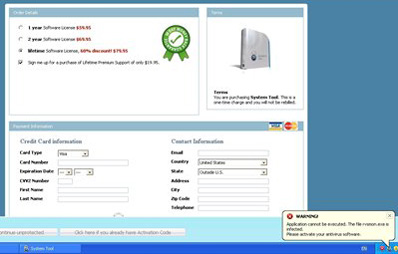