Malvertising is on a significant rise, having doubled from Q3 to Q4 2010, according to Dasient. 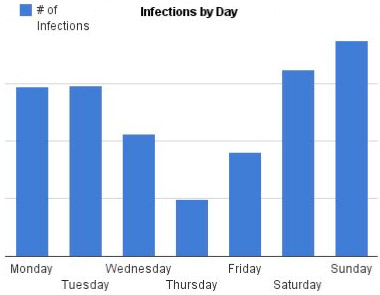 More than one million web sites were estimated to be infected in Q4 2010. As compared to data from one year prior (Q4 2009), web malware infections have nearly doubled and are a growing threat that needs to be abated.

The probability that an average Internet user will hit an infected page after three months of web browsing is 95%.

Dasient found that most social media networks are prone to being used as distribution platforms for malware. They conducted some safe, benign experiments on various social networking sites, and found that infections can occur relatively easily through them via user-generated-content (UGC) interactions and advertisements.