A new Japanese disaster themed campaign is doing the rounds of inboxes.

The e-mails supposedly offer links to videos about “The village that escaped the tsunami”, “Struggle for normal life in Japan”, “Woman talks about tsunami escape”, and “Japan tsunami touches New Zealand”.

Also, the e-mails come in different forms – some very amateurish and very obviously fake, others in the form of a notification e-mail from Twitter: 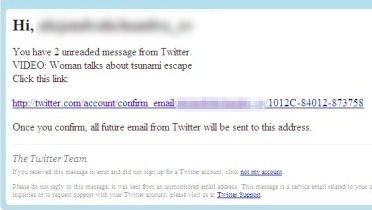 “The webpages linked to from the emails contains malicious Javascript and a Java Applet which attempt to exploit the CVE-2010-0840 vulnerability in the Java Runtime Environment,” says Graham Cluley, and advises users to get their daily fix of news from Japan from a legitimate news site.