According to PandaLabs research, 25 percent of sites used video and multimedia content as bait; 21.63 percent referred to installers or program updates; 16.53 percent claimed to contain cracks and keygens and 16 percent were social media URLs. 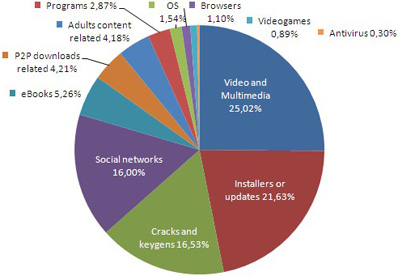 “Users continue to fall victim to malicious links offering to take them to an exciting video or the new episode of their favorite TV show. This technique has become a weapon of choice for hackers as it requires minimum investment and attracts a large number of victims,” said Luis Corrons, Technical Director of PandaLabs.

“Most of these sites download Trojans onto users’ computers without their knowledge. Therefore, a good security solution capable of blocking them proactively is extremely helpful for users who, in most cases, can’t distinguish between ‘good’ and ‘malicious’ websites.”

Most blocked URLs in Q1

The three most blocked sites by Panda Security in Q1 2011 were three Brazilian web pages. The first was a video released by the Japanese consulate showing the rescue of a group of tsunami survivors; the second, a video supposedly showing a short circuit causing the death of 15 people; and the third supposedly contains footage of a police officer being fired because of his Internet activities.

The study shows user preferences in relation to the malware lures used. When taking a look at P2P applications, Panda found that the most popular program is Ares, followed by Torrent and eMule. As for social networks, Facebook tops the list ahead of Messenger, Tuenti and MySpace.

The most searched for operating system is Windows, followed by Mac and Linux. Finally, Explorer still dominates the web browser market, with Firefox and Chrome trailing behind.

“There are no hidden secrets when it comes to finding out if a website is legitimate or not, but it is becoming increasingly complicated for users to differentiate them. Unfortunately, many users don’t know if their security system is good enough to protect their systems, which is where a lot of these problems originate,” said Corrons.