GFI Software announced the top 10 most prevalent malware threats for the month of March 2011. GFI researchers found that the Japanese tsunami, earthquake and subsequent nuclear disasters led to a high volume of insidious cyber attacks during the month.

“In March, we saw an apparently endless collection of scams related to the earthquake and tsunami in Japan, including fake donation websites, Facebook clickjacking and 419 spam emails (otherwise known as advance-fee frauds, where the target is fraudulently persuaded to advance sums of money). In addition, we also observed search engine poisoning involving radiation levels that sent people to malware sites.” said Christopher Boyd, senior threat researcher, GFI Software. “We’ve provided some details and a list of suggestions to help users avoid falling victim to these scams.”

March also saw many other varied forms of attack, including numerous rogue Facebook applications, ransomware (which locks users out of their PCs until they call a long distance toll line for an unlock code), and the usual glut of fake antivirus programs and system defragmenters.

Scammers are also starting early in the build-up to Easter with SEO poisoning related to printable Easter cards and Skype calls from individuals who attempt to have their victim visit a URL that promotes a fake antivirus program.

GFI statistics show that Trojans made up seven of the top 10 malware threats of the month. Trojans detected as Trojan.Win32.Generic!BT (a generic detection that encompasses a broad array of Trojans) continue to be the number one threat, accounting for 20.61 percent of total malware found. 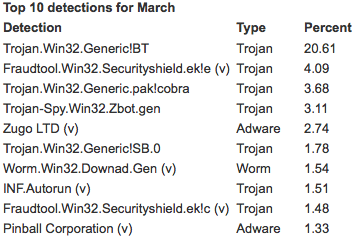