Facebook users are already accustomed to practically daily offers of rogue apps that will supposedly show them who views their profile or allow them to use a similar feature not offered by the social network, but Twitter users are yet to be inundated with such offers.

But, that doesn’t mean that they haven’t occasionally been targeted by scammers with similar offers. Some two months ago, a survey scam luring users in with promises of showing them how much time they spent on Twitter has spread virally.

This time there is no survey involved, but the lure is the same. According to Sophos, the messages with the link to the rogue app contain words regarding trending topics and the usual overly enthusiastic message of just how many hours the user has spent on Twitter.

The link takes the prospective victim to a rogue third-party application (TimeChecker2.6), which – among other things – asks the user to give it permission to post Tweets on his behalf.

Once the user authorizes the app, it immediately starts tweeting out the same message for which the user has fallen for. The victim will probably fail to notice this immediately because he will be waiting for the results: 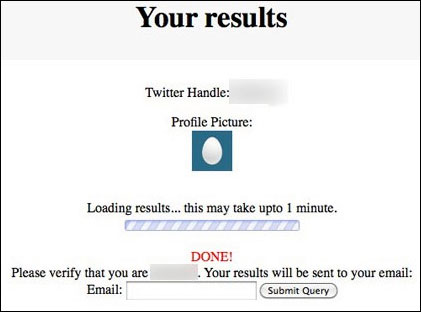 To see those results, the user is asked to submit his email address – and the real goal of the app is revealed: email address harvesting for future spamming.

If you have fallen for this scam, there is not much you can do except to revoke the permission given to the app and to hope that your followers have had the good sense of not following the link to the rogue app.