April saw a continued increase in the volume of detected malware, with 73,000 new variants of threats being released daily – a 26 percent increase over the same period last year, according to GFI Software.

“In addition to the increase in fake AV offerings, April saw a rise in high-profile security breaches. Both online marketing firm Epsilon and Sony’s PlayStation Network had security breaches at the hands of hackers last month,” said Christopher Boyd, senior threat researcher at GFI Software. “For those affected by serious data breaches, it is of the utmost importance to maintain vigilance well after the initial chaos has ended.”

Internet-based scammers are using an array of techniques to infiltrate end-user computers. Popular methods include SEO poisoning attacks to hijack legitimate search results, such as searches for printable Easter cards and Royal Wedding coverage, as well as rogue AV applications and malicious websites that prompt users to install fake software on their PCs to view supposedly exclusive content.

The Royal Wedding also presented an additional challenge to consumers, businesses and Internet service providers. While most UK citizens watched the ceremony on TV at home, many viewers internationally turned to free online streaming offered by YouTube and news sites to watch live and on-demand coverage of the big event.

Underscoring the need for a comprehensive web monitoring solution, popular streaming video poses a threat of SEO poisoning and other malicious attacks (through users being misdirected to malicious websites while searching for a video), while itself putting significant pressure on network bandwidth, resulting in slow data transfers and reduced productivity.

GFI warns users to be mindful of Internet searches for several high profile events during the month of May as well. These may include malware attacks surrounding the Indianapolis 500, Towel Day (celebrating the late author Douglas Adams) and college graduation season. Any of these events could be prime targets for SEO poisoning or phishing attacks, and users should also be wary of unsolicited emails or web offers.

GFI’s top 10 malware list is compiled from collected scan data of tens of thousands of GFI VIPRE Antivirus customers who are part of GFI’s ThreatNet automated threat tracking system. Consistent with the month of March, ThreatNet statistics revealed that seven of the top 10 malware threats in April were Trojans.

Trojans detected as Trojan.Win32.Generic!BT (a generic detection that encompasses a broad array of Trojans) continue to be the number one threat, accounting for 20.73 percent of total malware detected this month. 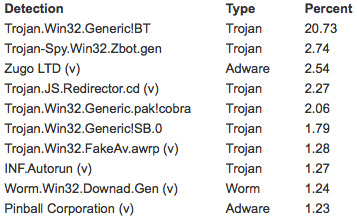