The hacktivist group behind the Fox breach seems to have made good on its promise to “own more things next week” – they have targeted the PBS website during the weekend.

According to Wired, the hit was made in retaliation for the PBS’ Frontline documentary about Bradley Manning and WikiLeaks, which they feel has not done justice to the young army private.

The group – which calls itself “Lulzsec” – has managed to breach the PBS servers and exfiltrate a large amount of data. Finally, to make the breach public and as embarrassing as possible for the broadcasting company, they published a fake news item saying that the famous (decesed) rapper Tupac Shakur is alive and living in New Zealand on the PBS website: 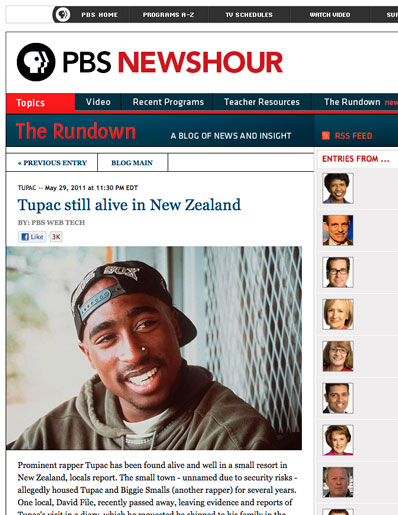 PBS has removed already removed the story, but not before Google had a chance of indexing it.

The stolen information – lists containing MySQL root passwords, press passwords, Frontline logins, names and IP addresses of the company’s servers, a map of the website’s database and more – has been made available on pastebin.com, and the links to those pages tweeted to the public.