GFI Software announced the top 10 most prevalent malware threats for the month of May 2011. The month was marked by a number of Facebook survey scams baiting users with offers of free airline tickets, as well as exclusive video footage of Osama Bin Laden’s death.

In May, users also faced the continued threat of rogue antivirus attacks around the Web, including a fraudulent Brad Pitt fan club website.

“Surveys are an increasingly common tactic used to disguise a wide range of security threats lurking on Facebook and other social networking sites,” said Christopher Boyd, senior threat researcher, GFI Software. “Scammers also have improved their ability to immediately hijack high-profile news for their attacks. By exploiting breaking and developing news stories, they are catching users off guard. Users should always be wary of promises of free items or sensational content, and they should never share personal and financial information online unless they are dealing directly with a known, trusted and secure website — not a Facebook or Twitter post claiming to represent a recognized business or organization.”

Online scammers employ a number of lures to entice victims to participate in their surveys. Offers of free merchandise are often enough to trick users into reposting messages to their Facebook wall, which then redirect their friends to the same surveys.

At best, those filling out the survey will be on the receiving end of high volumes of spam. At worst, any personal information they shared will be exploited by identity thieves, and their PCs will be infected with a broad range of malicious malware.

In addition to traditional scams offering free merchandise or preying upon public curiosity by offering fake exclusive content such as video footage of Osama Bin Laden’s death, GFI also uncovered a viral spam attack on the popular microblogging site Tumblr. Taking advantage of the ease of Tumblr’s reblog feature, spammers tricked users into reblogging a phony message meant to keep their account from being deactivated.

GFI recommends that users always investigate the original source of an “official message” to avoid such attacks. 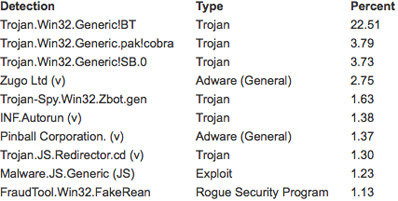