The volume of spam in email traffic increased 2.1 per cent in May, when compared with the previous month, making up on average 80.8 per cent of the total.

A reduction of phishing messages was also noted, while the share of postings containing malware increased, according to Kaspersky Lab. 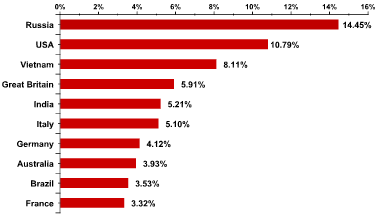 In May, spammers actively used current hot topics in the news to deceive users. In particular, a surge in the number of messages was detected exploiting the news of the death of Osama bin Laden. Such messages contained malicious files as well as links to legitimate payware.

News of the death was even used in the emails of the so-called Nigerian scammers. The trick they used to attempt to extract funds generally stayed the same: the scammers request payment of a small sum with the promise of being returned a much bigger sum in the future.

It is worthwhile noting that instead of traditional requests for “help’, these new email scams threaten users by saying that their accounts can be frozen due to the suspicion that they are connected with terrorism.

In terms of regional change, Russia has become the world leader in terms of the quantity of malware found in emails detected by antivirus programs, replacing the USA, where the quantity of infected emails received fell by 3.5 per cent.

The most widespread malware distributed via email was the Trojan-Spy program Trojan-Spy.HTML.Fraud.gen. Worms like Email-Worm.Win32.Mydoom.m, Email-Worm.Win32.Bagle.gt and Email-Worm.Win32.NetSky.q all remained high in the ratings, while newcomers included two Trojan-Downloader.Win32.FraudLoad Trojans. This type of program installs fake antivirus programs on PCs.

The most marked changes took place in the ratings of web services attacked the most with the use of phishing emails. 4.67 per cent of all phishing emails were intended to steal passwords for the popular free online game RuneScape.

As a result, this platform made its debut in the top-ten straight in at No. 3 – way ahead of World of Warcraft – the most popular online game in the world. RuneScape is also of interest to cybercriminals, as it has access to user details of the popular social networking site, Facebook.

The overall leader in the rating remained the payment system PayPal, which saw a small rise in the number of phishing emails (23.28 per cent on the figure for April 2011).