Travelers left behind more than 11,000 laptops, tablet PCs, smartphones and USB sticks in airports in the United States during the past year. 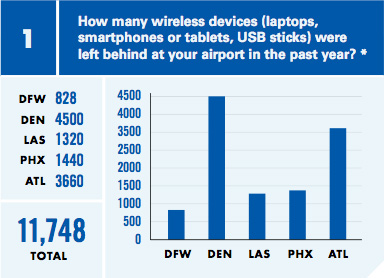 According to the Federal Aviation Administration, more than 133 million passengers boarded a flight at one of the aforementioned airports in 2010. The vast majority were carrying at least one wireless device, perhaps two or more.

Surprisingly, travelers tend to leave laptops, tablets and smart phones behind at a much higher rate than USB sticks. Credant’s research showed that, 4,416 laptops (37.5 percent), 4,380 tablets/smartphones (37.2 percent) and 2,952 USB sticks (25.1 percent) were left behind.

While security checkpoints are the most popular locations for devices to be left behind, airports also report food courts, baggage claim areas, restrooms and check-in gates also make the list.

Amusingly, laptops, tablets and USB sticks weren’t the only items travelers leave behind at airports. Other items run the gamut from eyeglasses, hearing aids, dentures and baby strollers, to urns, pets, motors, bowling balls, and even prosthetic legs.

The consequences of leaving behind these devices is difficult to quantify, but people traveling for business or pleasure are likely to access their company’s corporate network, favorite website or online merchant, resulting in sensitive information residing on endpoint devices. If unauthorized individuals can obtain one or more of the devices left behind at an airport, and the device is not encrypted, the consequences could be severe.

“Our survey of five airports in the United States shows that travelers are leaving behind their portable devices at an alarming rate. Extending these results across a larger number of airports would indicate that hundreds of thousands of devices are left behind every year,” said Bob Heard, CEO of CREDANT Technologies. “Unsecured data on lost devices can end up in the wrong hands with potential consequences of fraud and identity theft. To combat this it is critical for all devices accessing corporate networks or carrying sensitive information to use encryption software.”