A malicious email purportedly coming from the New York State Police is currently doing the rounds of inboxes and trying to scare people into opening and running the attached file: 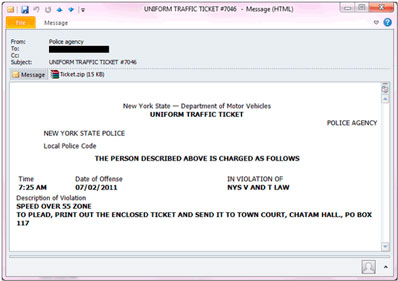 The recipient has supposedly been caught speeding and is served with a ticket. In order to contest the charges, he is urged to print out the enclosed ticket and send it to court.

Unfortunately for the less observant users, the attached .zip file contains the ticket.exe file. When run, the file calls back to a remote server and downloads another executable from it.

This executable is a rogue system performance application that identifies itself as “Windows XP Fix” and begins showing pop-up windows indicating that the user’s hard drive has critical errors on it.

As expected, in order to fix those problems, the user is urged to purchase the “Advanced Module”. Once he does that, the error messages disappear, but the user has been duped into giving up his hard-earned money for a service he didn’t need.