Hacktivist group LulzSec is back in business. It has added to the pressure put on Rupert Murdoch following the phone hacking scandal by hacking into News International servers, hijacking the front page of The Sun and redirecting users to the (also compromised) new-times.co.uk site where a fake story about Murdoch’s suicide was featured: 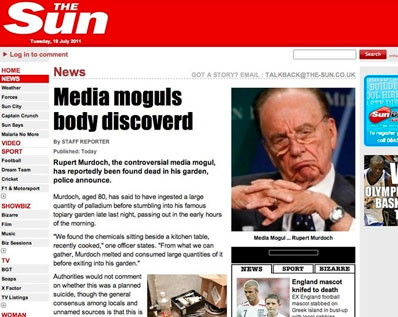 The fake news item about Murdoch’s death had him ingesting a large quantity of palladium and dying in his garden.

After a while, the New Times website went down, apparently DDoSed by all the visits, and LulzSec redirected all Sun visitors to its own Twitter feed.

The group claims that they have disrupted News International’s DNS servers. According to ars technica, they have apparently also managed to breach the company’s mail servers and are planning to release a batch of emails stolen from them – including those sent and received by Rebekah Brooks, the former chief executive of News International.