It seems that the long awaited WikiLeaks leak containing documents regarding Bank of America will not be happening in the near or possibly not in any kind of future, since the documents were part of a batch taken by former WikiLeaks member Daniel Domscheit-Berg when he left and have now – by his own admission – been irrevocably destroyed.

The tweets on WikiLeaks’ official Twitter account confirm Domscheit-Berg’s revelation and add that among the 3,500+ unpublished (and now destroyed) files was also a great number of other sensitive documents: 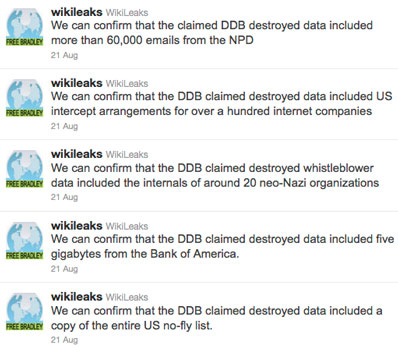 According to Spiegel Online (Google Translate), Domscheit-Berg’s justification for this move was that WikiLeaks and Julian Assange could not guarantee that the sources of those documents would stay anonymous.

Assange has claimed previously that Domscheit-Berg was looking to sell back the stolen documents to WikiLeaks, but apparently no such arrangement was agreed upon.

In the meantime, Domscheit-Berg’s membership in the Chaos Computer Club (CCC) was revoked after the organization’s board decided that his call for visitors and participants of the Chaos Communications Camp hacker conference to try to hack the OpenLeaks test site was an attempt to exploit the organization’s reputation for his own ends.

CCC’s spokesman Andy M??ller-Maguhn claims to have also help mediate a return of the now destroyed documents from Domscheit-Berg to WikiLeaks.

“For 11 months, I have tried to intercede between Julian Assange and Daniel, because I know them both and I believe the idea of a whistleblowing platform is right,” he said in an interview. “When Domscheit-Berg left WikiLeaks amid conflict there, he also took the archive and unpublished submissions with him. He said that he had no plans to use the material for himself or OpenLeaks. But now I have my doubts about that. I have put lots of patience and discussion into this. Still, flimsy excuses have led to unbelievabe delays in the handover of the archive. I can no longer believe in his willingness to hand over the unpublished material either.”

That was over a week ago, and as it turns out, his lack of faith in a satisfactory solution has been validated by recent events.