Heidi Klum has replaced Cameron Diaz as the most dangerous celebrity to search for on the Web, according to McAfee. 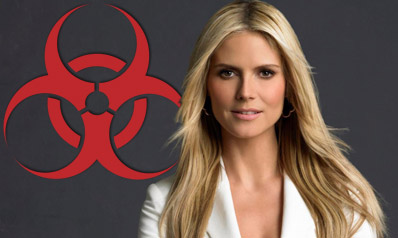 For the fifth year in a row, McAfee researched popular culture’s most famous people to reveal the riskiest celebrity athletes, musicians, politicians, comedians and Hollywood stars on the Web. The McAfee Most Dangerous Celebrities study found movie stars and models top the “most dangerous” list this year, while singers and sports stars are among the safest.

Cybercriminals often use the names of popular celebrities to lure people to sites that are actually laden with malicious software. Anyone looking for the latest videos or pictures could end up with a malware-ridden computer instead of just trendy content.

McAfee research found that searching for the latest Heidi Klum pictures and downloads yields more than a nine percent chance of landing on a website that has tested positive for online threats, such as spyware, adware, spam, phishing, viruses and other malware.

Top 10 list
1. Heidi Klum – Klum, the former Victoria’s Secret model and current producer of “Project Runway” moved up from No. 10 on last year’s list to No. 1 today. Searching for Klum results in nearly a one in ten chance of landing on a risky site.

2. Cameron Diaz – 2010’s Most Dangerous Celebrity fell to second place, with searches resulting in slightly fewer risky sites this year. She has most recently been in the spotlight with her 2011 movies “Bad Teacher” and “The Green Hornet.”

3. Piers Morgan – A new addition to the top ten list, Morgan is also the most dangerous male celebrity. He is best known as the host of “Piers Morgan Tonight,” taking over for Larry King, a winner of the “Celebrity Apprentice,” and one of the judges on “America’s Got Talent.”

4. Jessica Biel – 2009’s Most Dangerous Celebrity fell one more spot this year with searches resulting in fewer risky sites. Biel continues to be in the spotlight with her on-again, off-again relationship with Justin Timberlake, and her appearance in “The A-Team” in June 2010.

5. Katherine Heigl – The former “Grey’s Anatomy” star moved into the top ten for the first time this year. Heigl has appeared in recent movies such as “Killers” and “Life as We Know It.”

6. Mila Kunis – The former star of “That 70s Show” makes her first showing in the top ten, bolstered by starring in movies such as “Black Swan” and “Friends with Benefits.”

8. Adriana Lima – Searching for downloads of this Brazilian beauty can direct users to red-ranked sites. Lima is best known for being a Victoria’s Secret Angel since 2000. Searching for Lima became slightly safer, moving her from No. 6 last year, to No. 8 this year.

9. Scarlett Johansson – The former child star has gotten more dangerous as she’s grown up. Named in 2010, as “Babe of The Year” by GQ Magazine, Johansson most recently appeared in “Iron Man 2.”

10. Emma Stone, Brad Pitt and Rachel McAdams – Pitt has been a mainstay of this list, appearing in the top ten for the past four years. Stone and McAdams are new to the top ten. Stone, the star of last year’s “Easy A” has appeared in “The Help” and “Crazy Stupid Love” this year. McAdams has most recently appeared in “Morning Glory” and “Midnight in Paris.”

This year actor Charlie Sheen made headlines with his highly public departure from “Two and a Half Men” and his one-man roadshow, among other things. Despite the publicity, however, Sheen is not classified as a “dangerous” celebrity. Sheen ranked No. 59 on this year’s list, with less than three percent of searches yielding risky results. Lindsay Lohan, another tabloid favorite, ranked No. 18 on this year’s list, tied with Gwen Stefani and Reese Witherspoon.

“Hot movies and TV shows, awards and industry accolades seem to be more of a factor than headline-grabbing activity,” said Greve. “Still, searching for any celebrity can bring up risky sites and the public should use caution by not clicking on any page that looks suspicious.”