Apple is expected to unveil the next iteration of its popular iPhone during a press event scheduled for tomorrow (October 4). As the excitement regarding the release of the new “iPhone5GS” slowly reaches its peak, here to take advantage of it is the usual assortment of malware peddlers. 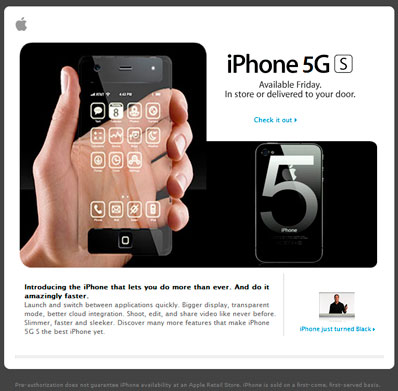 Emails containing the above offer of checking out the new device have been hitting inboxes today and luring users into clicking on the link, which unfortunately takes them to a Windows executable.

The file – iphone5.gif.exe – is hosted on a compromised server. Once downloaded and executed, the file shows to the user a bogus “iPhone5” image while installing an IRC bot in the background, which connect to a remote server.

“Infected machines can be centrally controlled via this server and are exposed to things such as credit card theft. In fact, the malware contains this text inside it: ‘I wanna be a billionaire so frickin bad!'” concludes F-Secure.