Facebook users are constantly targeted by emails posing as legitimate notifications from the popular social network, and the latest ones are an upgraded version of an old fake notification in which the scammers claimed that the user had lost a message on Facebook: 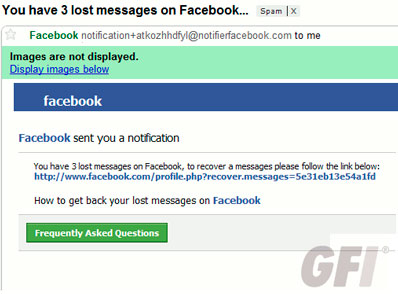 This time, it’s three messages that the user has supposedly “lost”, but a click on the offered link – which at first glance looks rather legitimate – takes the targets to the a page peddling the ubiquitous fake Viagra.

“If you were really that worried about losing your Facebook messages, I suppose you could just have copies of them all sent to your mailbox,” points out GFI’s Christopher Boyd. “At the very least, hover over the links included in these emails – you’ll see that they take you to places that most definitely are not the official Facebook website.”