Facebook spammers have already used a number of different approaches to make users inadvertently propagate their scams, and most of them fall into the social engineering category.

A particularly intriguing technique has recently been spotted by Symantec researchers, who believe that this type of approach is likely to be used a lot in the near future.

In short, the scammers make the victim’s account post messages by executing a Cross-site Request Forgery attack after the victim herself has been tricked into sharing her anti-CSRF token generated by Facebook.

Once they have the anti-CSRF token, the crooks can generate a valid CSRF token, which allows them to re-use an already authenticated session to the website to post the offending message unbeknownst to the user.

The attack begins with a typical message inviting users to see an “amazing video” or similar content. A click on the link takes the user to a fake YouTube page, and when he wants to see the video, a window pops up telling him that he must pass the “Youtube Security Verification”: 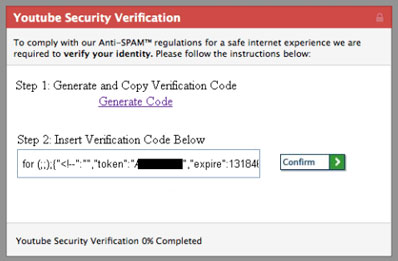 When he clicks on the Generate Code link, a request is sent to 0.facebook.com/ajax/dtsg.php, which returns JavaScript code containing the session’s anti-CSRF token in a separate window.

After the user has copied and pasted the generated code into the empty field and pressed the “Confirm” button, he has effectively sent the code to the attacker who extracts the anti-CSRF token, creates a CSRF token and inserts is in his own piece of code that finally executes the CSRF attack and posts the malicious message and link on the user’s Facebook Wall.

Attacks asking Facebook users to copy/paste JavaScript in order to gain access to some content are not new to the social network, but spammers have not used them a lot lately.

Perhaps it is because of the automated monitoring of accounts for suspicious behavior that Facebook has introduced, or perhaps they have misused the approach too many times in a short period, making users vary of such requests. In any case, the researchers believe that this particular approach might gain in popularity, but say that other innovative approaches are sure to come.