Facebook survey scams mostly follow the same pattern: they lure users in with offers of watching a funny/amazing/adult-themed video, directly ask them to “share” and “like” it, then complete a survey in order to be able to watch it. But every once in a while, a slightly different approach is used.

Symantech researchers have recently spotted a survey scam inviting users to see a leaked video of Selena Gomez and Justin Beiber, but instead of sharing it with their friends, the victims are told they need to download and install a “Youtube Premium” extension in order to be able to see it: 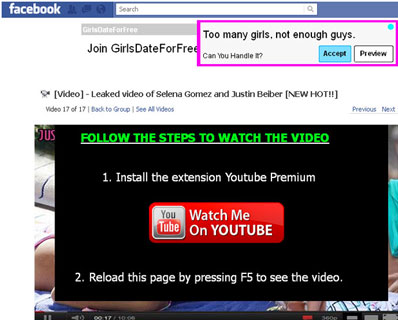 Clicking on the image of the video takes the victims to an iframe-loaded site from which the plug-in is downloaded (currently only Mozilla Firefox and Google Chrome).

Unfortunately, the extension isn’t what it claims to be. It actually contains a number of scripts whose mission is to download other scripts, and one of those posts the image of the video and a random message inviting friends to click on it to the victims’ Facebook profile page, while effectively hiding the fact from the users.

From then on, the scam unfolds in its usual way, asking users to complete a “30-second test” to “prove they are human”.