Android users who were looking forward to playing the popular Temple Run game – currently available only for iOS devices – have probably thought that the happy day has arrived when they discovered the app being offered on the official Android Market:

Unfortunately for them, the app doesn’t deliver on the promise.

“If the Android-based device has Facebook installed, it asks the user to share the fake app on Facebook before playing the game,” explain Trend Micro researchers. “It would also prompt the user to rate the application in the Android Market.”

Having done that, the user is disappointed: 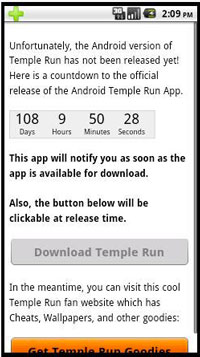 Now, there are legitimate countdown/fan Temple Run-themed apps on the market, but its developers say it like it is and do not claim that the apps are actually the game ported to Android.

This particular app – which has already been flagged and taken down by Google – aims at displaying ads through mobile notifications.

Mobile users are advised always to check whether the name of the (popular) app’s developer is the correct one (in this case, Imangi Studios).