Cyber crooks often try to pique the users’ interest with fake news of a celebrity death but, unfortunately, sometimes they don’t have fake it.

Pop diva Whitney Houston died on Saturday and scammers wasted no time in taking advantage of the sad news to make them complete a number of surveys.

Facebook users are lured in by messages posted on their friends’ walls saying “I Cried watching this video. RIP Whitney Houston” and offering a link to a “Whitney Houston Death Video Exclusive”.

Clicking on the link takes the users to a Facebook page that contains another link to the video, which then leads them to a survey scam site via a number of redirections.

Twitter users suffered a similar attack. Clicking on the link included in a tweet saying “RIP Whitney Houston”, they are initially taken to a blog dedicated to Houston but are redirected to another site offering a number of Whitney Houston wallpapers for download. 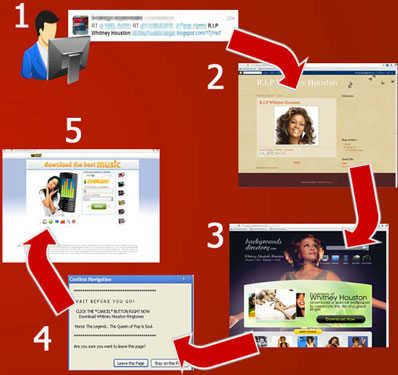 “Once users decide to download a wallpaper, a pop up window appear that asks users to download some ‘Whitney Houston ringtones’,” warns a Trend Micro analyst. “Whatever the users choose – whether to leave the page or stay on the page – they will be redirected to the a survey site that asks for mobile numbers.”