As Apple announced an event taking place on March 7 and speculations of it being the formal presentation of the new version of the iPad flooded the Internet, scammers have decided to take advantage of the frenzy.

Facebook and Twitter users are currently being targeted with fake offers of a “free iPad 3” (and iPad 2, occasionally): 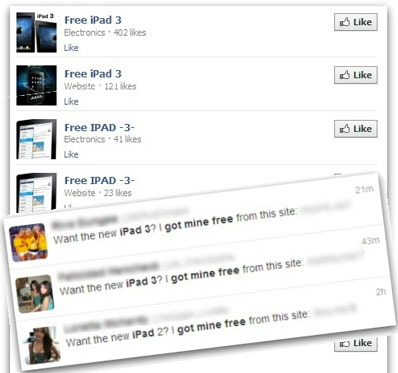 “As Apple hasn’t even announced the existence of an iPad 3, these posts and pages (some of which have existed for months) are clearly up to no good,” says Graham Cluley.

Facebook has reacted pretty quickly by taking down most of the pages, but it’s reasonable to assume that the scammers won’t be giving up that easily and keep setting them up.

As with the pages to which the user arrives when following the links offered on the tweets, the Facebook pages are set up to make users fill out surveys that earn money for the scammers. Needless to say, the offer of a free iPad is just a lure.