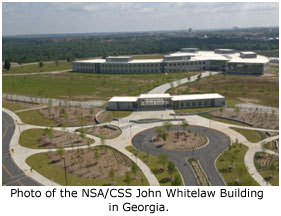 NSA/CSS has had a presence in Georgia for over 16 years on Ft. Gordon, when only 50 people arrived to establish one of NSA’s Regional Security Operations Centers.

“This new facility will allow the National Security Agency to work more effectively and efficiently in protecting our homeland,” said Sen. Saxby Chambliss. “It will also attract more jobs to the Augusta area. The opening of this complex means that Georgians will play an even greater role in ensuring the safety and security of our nation.”

The new NSA/CSS Georgia Cryptologic Center is another step in the NSA’s efforts to further evolve a cryptologic enterprise that is resilient, agile, and effective to respond to the current and future threat environment.

NSA/CSS opened a new facility in Hawaii in January 2012 and is also upgrading the cryptologic centers in Texas and Denver to make the agency’s global enterprise even more seamless as it confronts the increasing challenges of the future.