Trusteer researchers have discovered a new configuration of the Ice IX malware that attacks Facebook users after they have logged in to their account and steals credit card and other personal information.

Trusteer even discovered a marketing video used by the creators of the malware to demonstrate how the web injection works.

This latest attack uses a web injection to present a fake web page in the victim’s browser. The form requests the user provide their cardholder name, credit/debit card number, expiry date, CID and billing address. The attackers claim the information is needed to verify the victim’s identity and provide additional security for their Facebook account.

For anyone who believes the cybercrime economy lacks the sophistication of the legitimate economy, the marketing video provides conclusive evidence that it does not. Trusteer discovered this video circulating in underground forums. It demonstrates in step by step fashion a webinject cycle performed to attack Facebook users.

The video begins at the Facebook logon page with the criminal logging-in to a Facebook account. Next, the video demonstrates the pop up created by the webinject that is being offered for sale. This pop up presents virtually the same message used in the Ice IX configuration Trusteer researchers discovered and analyzed. The only difference is the version in the video requests a social security number and date of birth, in addition to the information mentioned earlier. In the video, the criminal fills out the fields. 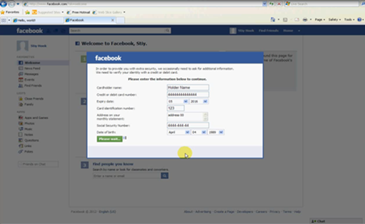 Finally, the information entered in the pop up is shown being delivered to the fraudster’s messenger application. 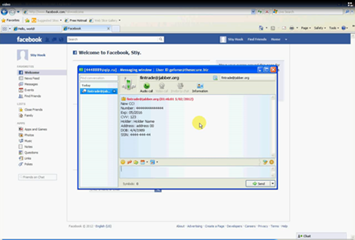 “This video illustrates the seamless sophistication of pre-built webinjects that are readily available for purchase on the internet,” said Trusteer CTO Amit Klein. “It also demonstrates how accomplished criminals are at marketing their malware products. Most of all, this attack highlights how fraudsters are branching out from their “bread and butter’ online banking schemes into lateral applications with much larger user populations. By attacking Facebook and other ubiquitous social networks fraudsters can tap a massive pool of victims. They can also use the information harvested from social network users to perpetuate fraud on multiple in fronts including online banking, retail, and even to penetrate enterprise and government networks.”

Trusteer contacted Facebook to advise them that they would be mentioned in this blog. Facebook requested that they pass on some information about their site’s security measures. Here’s a summary of their response:

2. Please advise your readers to report to Facebook any spam they find on the Facebook site, and remember Facebook will never ask for your credit card, social security, or any other sensitive information other than your username and password while logging in.