Facebook has announced that it’s partnering with five top security companies and it will be offering downloads of their anti-virus solutions on a newly created AV Marketplace accessible from its Security page. 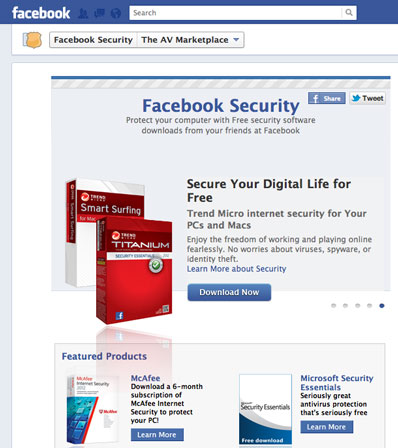 “The Facebook Security Team has pioneered many innovative defense systems against viruses, spam and phishing attacks, as well as extensive automated enforcement mechanisms that quickly shut down malicious pages, accounts and apps,” says Facebook, but it has also finally decided to take advantage of the malicious URL databases of Microsoft, McAfee, TrendMicro, Sophos, and Symantec and incorporate them into its URL blacklist system.

“This means that whenever you click a link on our site, you benefit not just from Facebook’s existing protections, but the ongoing vigilance of the world’s leading corporations involved in computer security,” explains Facebook.

In addition to this, the social network has opened an online marketplace from which users can download for free six-month licenses to full versions of the aforementioned companies’ anti-virus software.

These companies will also be sharing educational material on the Facebook Security Blog.

It’s definitely a praiseworthy initiative that seems to be a win for everybody: users get a free AV solution for at least 6 months (Facebook didn’t specify what happens after), the social network’s Security Team’s job gets easier, and the security companies get a new way of securing new customers.