Emsisoft Emergency Kit 2.0 protects against malware infections of any kind. It is fully portable and therefore requires no installation whatsoever, ready to be launched directly from storage media devices. 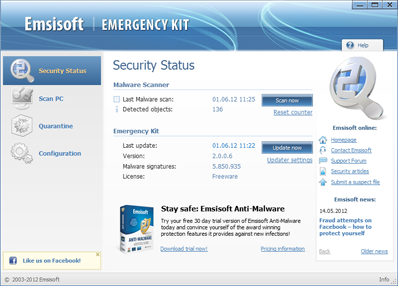 Emsisoft Commandline Scanner
This scanner features the same functions as the Emergency Kit Scanner, but without the GUI. It is controlled instead by the command line parameters. Professional users can integrate the program into automatic batch actions in an efficient manner.

Emsisoft HiJackFree
Experienced users can use this tool to detect and remove malware in a targeted manner. It is possible to take full control of the PC to directly access all active processes, drivers, services, autoruns and open ports.

Emsisoft BlitzBlank
It is not always possible to simply delete malware during operation. BlitzBlank puts things right and removes files, registry entries and drivers while booting up before Windows or any other program is loaded.