Fortinet conducted a global survey that reveals the extent of the challenge posed to corporate IT systems by first generation Bring Your Own Device (BYOD) users; people entering the workplace with an expectation to use their own devices. 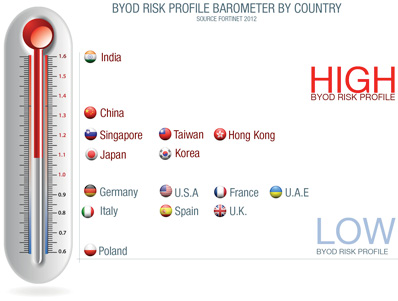 The survey describes the degree to which security is widely given low consideration by Gen-Y employees using their own devices, including the disturbing fact that more than 1-in-3 employees would contravene a company’s security policy that forbids them to use their personal devices at work or for work purposes. Overall, the findings underscore the urgency with which enterprises should develop security strategies to successfully secure and manage BYOD activity.

Within the demographic of the survey, which represents tomorrow’s management and decision makers, BYOD is confirmed as a mainstream activity. Nearly three quarters (74%) of respondents across all territories already regularly engage in the practice. More importantly, 55% of respondents view using their device at work as a “right’ rather than a “privilege.’

From a user perspective, the primary driver of the BYOD practice is that individuals can constantly access their preferred applications, especially social media and private communications. The dependence on personal communications is strong with 35% of respondents admitting they could not go a day without accessing social networks, and 47% unable to last a day without SMS.

The first generation of BYOD workers understand the risks posed by BYOD to their organization. Forty-two percent of the survey sample actually believe potential data loss and exposure to malicious IT threats to be the dominant risk.

Yet, worryingly for IT departments, this risk awareness does not prevent those workers from bypassing corporate policies. In fact, more than a third of respondents (36%) admitted they have or would contravene a corporate policy banning the use of personally-owned devices for work purposes. Of the 15 countries surveyed, the figure is highest in India where 66% admitted they have or would contravene policy.

The survey also hinted at the resistance organizations might face with regards to implementing security on an employee’s device. The majority (66%) of respondents consider themselves – not the company – to be responsible for the security of the personal devices they use for work purposes. This is three times the number who believes responsibility ultimately rests with their employer (22%).