Ransomware is still targeting users all over Europe and, as per usual, it shows warnings seemingly coming from police agencies of the country in which the victim resides (click on the screenshot to enlarge it): 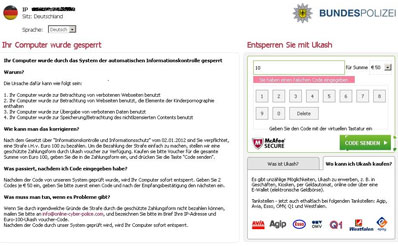 The messages typically tries to scare users into believing that they have been caught doing something illegal, and claims that the only thing that can unlock their computer is if they pay a fine via the Ukash e-commerce payment system.

It also helpfully includes instructions on where Ukash cards can be bought in that country, but lately McAfee researchers have also spotted a familiar graphic seemingly “guaranteeing” the secure sending of the code required to unblock the machine: a McAfee logo.

“We have seen the McAfee SECURE logo misused not just as part of this campaign, but also on malicious websites attempting to fool users into trusting the site,” the researchers pointed out, and shared tips on how to spot a fake trustmark.