Increasingly, cybercriminals are exploiting the names of popular sports stars and celebrities to attract people to sites that actually conceal malicious software.

Anyone looking for the latest videos or images may end up with a computer loaded with malware instead of the content they actually want.

McAfee researchers have analyzed the most popular players and teams to understand which are the most hazardous on the web and have identified Cristiano Ronaldo as the most dangerous player, with France and Portugal tieing for most dangerous national team.

The study uses the site ratings from McAfee SiteAdvisor that indicate which sites are risky when searching for names of famous players and teams participating in Euro 2012 on the web and calculates a percentage of overall risk.

The Dangerous 11 team consists of: 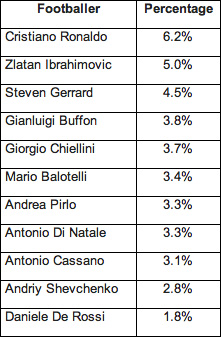