The compromised website of a Colombian transport company has been found serving a signed Java applet that detects whether the visitor is using a Windows, OS X or Linux machine and drops a different Trojan for each platform:

Windows and Mac users are asked to trust and run the served malware, but if the latter run OS X on an Intel processor, they will also be asked to install Rosetta – a piece of software needed to allow
applications written for Macs with PowerPC processors to run on an Intel one: 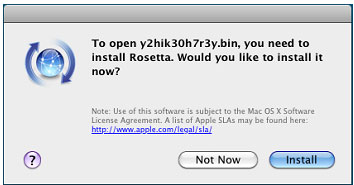 This additional step should have hopefully made them think twice about installing the offered application.

All of the served Trojans are backdoors, and according to the researchers, the Java applet that initializes the attack seems to have been created with the Social-Engineer Toolkit, a penetration testing tool.