Determined not to fall behind on its Java updates, Apple has issued the latest one on Tuesday, the very same day that Oracle pushed out its own.

But the big news isn’t in the lack of delay, but it Apple’s decision to uninstall its Java applet plug-in from all web browsers: 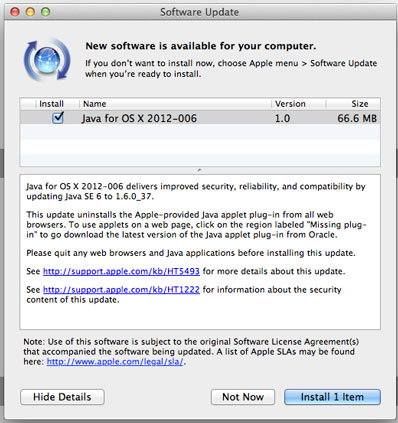 Apple has been slowly moving away from Java for quite some time now.

Starting with OS X Lion, it stopped shipping the OS with Java installed by default (but gave the option of installing a Java Runtime Environment (JRE) if needed), and then it made browsers disable the Java plug-in if it wasn’t used in the last 35 days.

Having already left the updating of Java 7 to Oracle, Apple is now only updating Java 6.

After this latest update, users that will want to user applets on a web page will have to click on the region labeled “Missing plug-in” to go download the latest version of the Java applet plug-in from Oracle.

Apple hasn’t commented on the reasoning behind this latest move, but it’s likely that it simply wants to wean its users off the rarely patched, oft-attacked software.