A massive spam campaign impersonating the Better Business Bureau is currently hitting inboxes around the world.

The emails urges users to check out a report and to respond to the matter urgently (click on the screenshot to enlarge it): 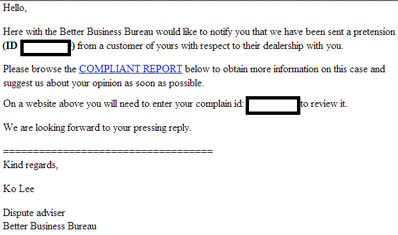 Unfortunately, the link to the page where the report can supposedly be found takes the victim to one of many compromised webpages serving client-side exploits and malware.

“Although I wasn’t able to obtain the actual malicious payload from this campaign, it’s worth pointing out that the cybercriminals behind it relied on the same infrastructure as they did in previously profiled malicious attacks launched by the same party,” shared Webroot’s Dancho Danchev. “We also know that on the following dates/specific time, the following malicious URLs also responded to the same IP (183.81.133.121).”

Users are advised never to follow links embedded in unsolicited emails, especially when they try to create a sense of urgency as this one does.