They found that less than 5% of anti-virus solutions in the study were able to initially detect previously non-cataloged viruses and that many solutions took up to a month or longer following the initial scan to update their signatures. 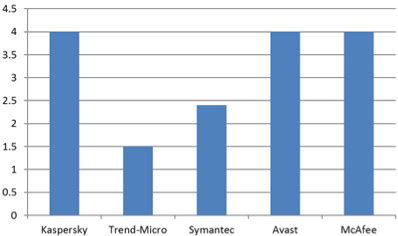 “Enterprise security has drawn an imaginary line with its antivirus solutions, but the reality is that every single newly created virus may subvert these solutions,” said Amichai Shulman, CTO, Imperva. “We do not believe that enterprises are achieving the value of the investment of billions of dollars in anti-virus solutions, especially when certain freeware solutions in our study outperformed paid solutions.”

Imperva utilized various methods for collecting more than 80 viruses. These 82 unreported viruses were tested in a virtual execution environment that ensured that they displayed behavior indicative of viruses and that limited the vulnerability to computing resources.

The key findings and implications of the report include:

Antivirus solutions in the study were unable to provide complete protection since they are unable to keep up with virus propagation on the Internet.

Antivirus solutions lag in updating signatures – In some cases in the study, it took anti-virus solutions up to four weeks following the initial scan to detect a virus.

Investment in antivirus is misaligned – In 2011, Gartner reported that consumers spent $4.5 billion on antivirus while enterprises spent $2.9 billion, a total of $7.4 billion or more than a third of the total of $17.7 billion spent on security software. In addition, certain freeware solutions in the study proved equally or more effective than paid solutions.

While Imperva did not find a single antivirus product that provided complete protection, the solutions that had the best detection rates included two freeware anti-virus products.

Despite the inadequacy of antivirus solutions, Imperva does not recommend completely eliminating them from an effective security posture. Instead, security teams should focus on detecting abnormal behavior, such as unusually fast access speeds or large volume of downloads, and adjust their security spend on modern solutions to address today’s threats.