Ransomware has replaced fake AV as the most high-profile and annoying malware targeting computer users around the world, and the approach is always the same: the owners of the blocked computer are urged to pay a fine because of their supposed illegal online behavior or asked to fork over money in order to get their hijacked files decrypted.

But the malware peddlers behind one of the latest ransomware attacks have had a novel idea – instead of asking for money, they are urging users to complete a survey in order to get their computer unlocked (click on the screenshot to enlarge it): 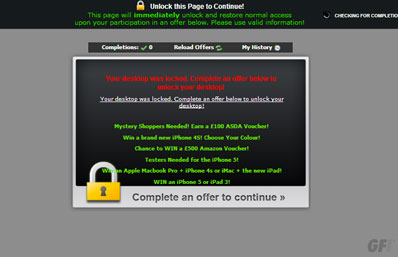 The offer is displayed from the unlockyourdesktop(dot)info, and users are faced with different surveys depending on where they live.

But these malware peddlers haven’t done enough to protect their malware from easy removal, as the computer’s Task Manager is still accessible.

“Regaining access to the desktop is simply a case of pressing CTRL + ALT + DEL to bring up Task Manager, navigating to the ‘Locker’ file then pressing ‘End Task’,” GFI’s Chris Boyd explains.

Given the low earning potential of the scheme, he believes this campaign to be a test run and thinks it likely that we will soon see a similar one that will be better at luring people in and making the ransomware stick.