You’re a spammer / malware peddler / phisher, and want to register hundreds of bogus accounts on a popular online service such as YouTube in order to lead users to your wares. But, you don’t want to create them manually yourself because that would take simply too much of your precious time – so what do you do?

According to Dancho Danchev, there’s an elegant solution out there, just waiting to be bought and implemented: a software tool that uses API keys offered by a CAPTCHA-solving services to automate the account registration process (click on the screenshot to enlarge it): 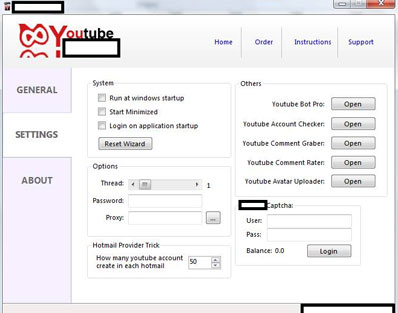 Apparently, the bot can create up to 30 accounts at the same time, it can upload videos, logs activities and more.

“What’s particularly interesting about this tool is the fact that every automatically created bogus account starts following another automatically created bogus account, leading to a self-serving, potentially fraudulent segment of fake users who will inevitably start commenting and liking each other’s videos in an attempt to artificially increase their popularity, thereby undermining YouTube’s reputation-based system,” shares Danchev.