ESET released new versions of its flagship products. Enhancements to both products include advancements in threat detection, more thorough cleaning of infected systems, and an improved user experience. 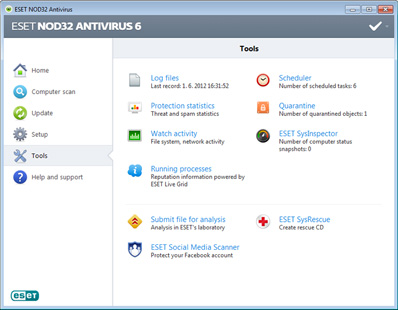 ESET NOD32 Antivirus 6 comes with improved usability and upgrades to the scanning engine for better overall performance. Both products benefit from Anti-Phishing protection as well as the new ESET Social Media Scanner App, which protects users and their linked friends against attacks launched from within Facebook. ESET Smart Security 6 further extends that functionality by adding Anti-Theft capabilities.

“ESET has always worked to be the fastest, most accurate, and complete antivirus solution available,” said Andrew Lee , CEO, ESET North America. “With the release of Version 6, we believe we have delivered on that promise while improving usability, driving value for our customers, and making it possible for people to use and enjoy their technology with confidence. Cyber security is about more than just technology. It’s about helping people make good decisions.”

In planning the latest product versions, ESET researched and evaluated the most prevalent security issues affecting North American customers. The findings reinforced that laptop and device theft continue to be a growing concern. A wide variety of sources identify computer theft as a leading cause of data breaches and identity fraud. Without protection, it is very unlikely that stolen computers are ever recovered.

In addition to computer theft, identity fraud remains a crucial issue. More than 11.5 million Americans were victims of identity fraud in 2011, according to Javelin Strategy & Research. Social media is also a growing factor in the threat landscape with nearly five percent of Facebook users reporting some degree of identity theft.

Features and benefits of both ESET NOD32 Antivirus 6 and ESET Smart Security 6:

ESET Social Media Scanner – Protects the social media user and their friends from malicious content, including protection of their profile, wall, newsfeed and private messages.

Antivirus and antispyware – Provides proactive protection against all types of online/oÃ‚Â­ffline threats and prevents the spread of malware to other users.

Scan while downloading files – Decreases access time to downloaded files by scanning them during the download process.