At the RSA Conference 2013 in San Francisco, Secunia announced the availability of Secunia SmallBusiness (public beta) – a cloud-based patch management solution for up to 50 PCs.

For the small business, protection against vulnerabilities is just as important as it is for large corporations, but deciding which security investments are necessary, worthwhile and manageable can be complicated. 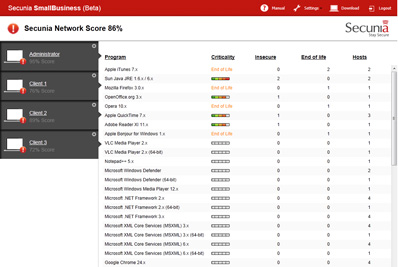 Secunia SmallBusiness is currently in beta. During the 3 month beta period it is free.
Once out of beta, the 5 first PCs are free, and additional PCs will be priced at less than $5 per PC per month.

Where large corporations have teams of professionals employed to monitor the IT infrastructure and address any security issues that arise, the SMB owner must depend on technology to protect the company assets, perhaps backed up by outsourced IT consultancy.

This means that choosing the right technology is crucial and this choice is often difficult for the owner of a small business, who presumably is more likely to spend time focusing on their day-to-day business than on the intricacies of software do’s and don’ts.

A relevant example is that, among security experts in the IT industry it has become an accepted fact that traditional antivirus is not enough and that vulnerable software is a major threat to PCs everywhere.

“It is well-known that the majority of breaches use already known vulnerabilities, and we know that a good patch management solution is a substantial part of the answer to that problem: a patch is available for 72% of all vulnerabilities within 24 hours on the day of disclosure, as documented by Secunia. Unfortunately, this is not common knowledge to the average user, who believes that antivirus and spam filtering is enough to protect them. If an SMB owner is not aware of these risks posed by these vulnerabilities, how will he or she ensure that their systems are secure? So the security industry should make an effort to explain the risks to the small business owners and their IT consultants and make an effort to develop products that are suited to the realities of small business life,” said Morten R. Stengaard, Director of Product Management and Quality Assurance at Secunia.