Half of companies have lost a device with important company data on it, causing security implications for over a fifth of organizations, according to Varonis.

57% of employees believe that BYOD puts their personal data at risk as well. Despite these concerns, 86% of the workforce are obsessed with their devices. 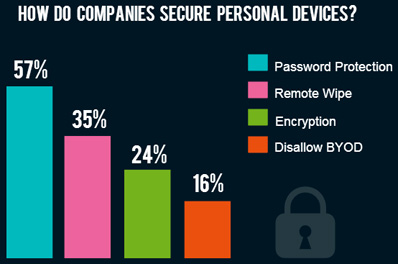 According to the findings, almost three quarters of employees are now allowed to access company data from their personal devices. In fact, regardless of whether they were in a BYOD-approved environment or not, employees equally appear to be device obsessed – 86% of employees use their devices for work all day and night, with 44% doing so even during meals. Additionally, 20% of respondents consider themselves “border-line workaholic’, 15% bring their devices on vacation, and 7% claim that their work and home lives are one.

This growing trend to work remotely is likely to have an impact on breaches and data leakages as mobile devices continue to have major security implications. Half of respondents stated that someone within their company has lost a device with important company data on it – and over a fifth admitted that a lost device had created a security implication for their company.

The study found that implementing a BYOD policy seems to have a small, though arguably statistically insignificant, positive effect on security as illustrated by a 5% drop in incidents at companies that have a BYOD policy.

By far the most popular method to secure mobile devices is password protection (57%), followed by 35% who wipe devices remotely, and 24% who use encryption.

Surprisingly, employees were not just concerned with their organisation’s security. A staggering 57% believe that using a personal device for work could pose a security risk to them personally through potential leakage and misuse of confidential health and personal information. At the same time, productivity drain is greater for companies that allow BYOD – nearly a quarter of employees stated that they spend more time than they care to admit using their personal device for personal use during work hours.

“Being connected to work around the clock appears to be accepted as the “new normal’,” said David Gibson, VP of Strategy at Varonis. “While organisations are capturing the many benefits of BYOD – and the willingness of the workforce to embrace this style of working – companies must protect themselves by:

Only by limiting the potential damage – both to organisations and employees – can organisations make the most of a trend that will continue to leap forward, whether businesses allow it to or not.”