86% of vulnerabilities discovered in the most popular 50 programs in 2012 were in non-Microsoft (or “third-party”) programs. The result was published today in the Secunia Vulnerability Review 2013 that analyzes the evolution of software vulnerabilities from a global, industry, enterprise, and endpoint perspective. 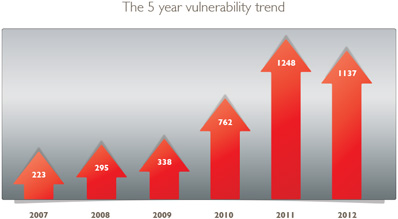 “In general we see good vendor response times for 0-day vulnerabilities throughout the large software manufacturers. For coordinated disclosures and disclosures on e.g. mailing lists the timeline is longer. This is most probably due to the vendors patch release cycles. We have seen shorter time-to-patch times from most of the vendors compared to 2011, there are however still room for improvement, so the vendors can ensure that users of their software receives patches in a quicker pace,” Kasper Lindgaard, Head of Research for Secunia, told Help Net Security.

Gartner places “patching beyond just the OS (common applications) on all systems” among their “Best Security” recommendations for securing midmarket IT environments.

Even so, IT professionals everywhere are inclined to focus on patching Microsoft programs, operating systems and just a few other programs. And ignoring the threat that vulnerabilities represent in non-Microsoft programs is both reckless and unnecessary. 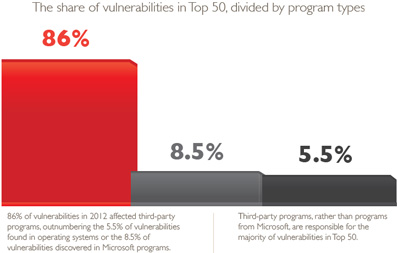 “Companies cannot continue to ignore or underestimate non-Microsoft programs as the major source of vulnerabilities that threaten their IT infrastructure and overall IT-security level. The number of vulnerabilities is on the increase, but many organizations continue to turn a blind eye, thereby jeopardizing their entire IT infrastructure: It only takes one vulnerability to expose a company, and no amount of processes and technology that supports operating systems and Microsoft programs will suffice in providing the required level of protection,” said Morten R. Stengaard, Secunia’s Director of Product Management.

Key findings from the report:

1. Non-Microsoft (third-party) programs rather than programs from Microsoft are responsible for the growth in vulnerabilities.

7. 84% of vulnerabilities had patches available on the day of disclosure; therefore the power to patch end-points is in the hands of all end-users and organizations. In 2011, the number was 72%.