The number of IT professionals considering leaving their job due to workplace stress has jumped from 69% last year to 73%, underlining the increasingly challenging business landscape in the UK and the growing emphasis being placed on IT to help businesses grow, thrive and compete.

One-third of those surveyed by GFI Software cited dealing with managers as their most stressful job requirement, particularly for IT staff in larger organisations, while handling end user support requests, budget squeeze and tight deadlines were also singled out as the main causes of workplace stress for IT managers.

Although users are not causing IT staff as much stress as they used to, it isn’t stopping them from creating moments that make IT admins want to tear their hair out in frustration. The survey asked IT admins what the most ridiculous thing was they had seen an end user do.

Responses included stories of users complaining their mouse wasn’t working when they were trying to use a foam stress squeezer, a user thinking there was a ghost in her PC when IT support staff remoted into it to deliver support, a user who reported the Windows version as being “Patio Doors”, and stories of users who folded up a 5.25inch floppy disc in order to fit it into a 3.5inch disc drive.

The most common issues were users complaining of hardware not working, only for IT to find the device was either not switched on or not plugged in, along with users spilling tea, coffee and other beverages over their computer or keyboard and then denying they had done it. 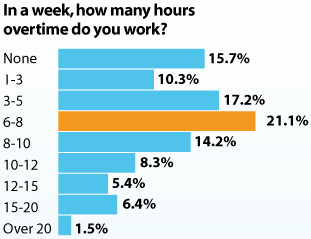 Personal lives and health affected by IT work stress

Of great concern is the impact that work stress is having on health and relationships. While a total of 80% of participants revealed that their job had negatively impacted their personal life in some way, the survey discovered some significant personal impact:

“The increasing importance of IT in the workplace — and with it, the critical responsibility placed on IT professionals – makes it impossible to overlook in this year’s survey figures,” said Phil Bousfield, GM IT Operations at GFI Software. “Companies are more reliant than ever on IT innovation, uptime and speed of deployment, and thus, IT staff are under extreme pressure to deliver for the benefit of the whole business. We all know that a happy workforce is a productive workforce, so it is concerning that so many of our survey respondents are stressed to the point that they are actively considering leaving their current role in order to achieve a better work/life balance. For SMBs in particular, the research is a stark reminder that IT staff need to be supported and given the right resources – staff, budget and technology – to do their jobs well and that management need to be an enabler, not an obstacle for IT progress.”