The results of a survey conducted by the American Chamber of Commerce in China which polled 325 respondents currently doing business throughout the republic has shown that a quarter of them have experienced a breach or theft of data and / or trade secrets from their China operations.

“This poses a substantial obstacle for businesses in China, especially when considered alongside the concerns over IPR (intellectual property rights) enforcement and de facto technology transfer requirements,” commented the non-profit organization representing the interests US companies and individuals doing business throughout the republic.

42 percent of the respondents also feel that the risk of a data breach to their China operations is increasing, while 53 percent says it’s the same as before.

China-based cloud computing is still regarded suspiciously by most of them, with 53 percent saying that they would not consider it (mostly because they have concerns about data security), and only 10 percent replying positively.

58 percent of the respondents consider China’s enforcement of IPR “ineffective”, and 14 percent “totally ineffective,” with a total rise of 13 percent when compared with last year.

Also, the fact that China effects online censorship is considered detrimental to the companies’ ability to conduct business normally by 55 percent of the respondents.

Still, these concerns are way down (or even non existent) on the list of current top business challenges (click on the screenshot to enlarge it): 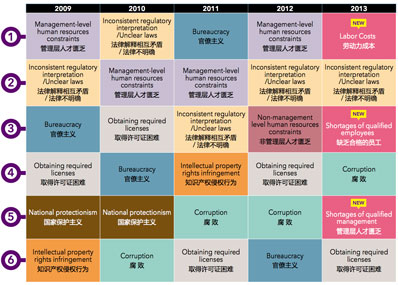 Obviously, IPR infringement still doesn’t affect the companies bottom line nearly as much the rise in labor cost and the shortage of qualified employees.

For more details about the survey results, you can download the recently released report here.