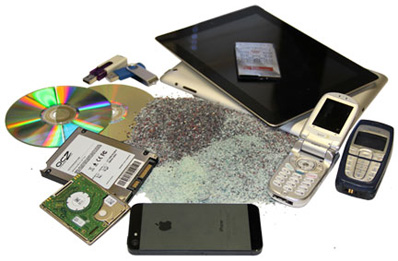 SSD and solid state media, record information differently than traditional HDDs. Solid State use assemblies of integrated circuits to store data, Hard Disks use magnetic platters. Since SSDs do not use magnetic materials, they are unable to be erased using a degausser like traditional HDD and must be physically destroyed.

The National Security Agency’s specification for the destruction of solid state is a 2mm particle size. The SSMD-2mm is the first device of its kind to safely destroy solid state media including cell phones, tablets, memory cards, thumb drives as well as optical media like CDs and DVDs under these requirements.

The SSMD-2mm is also intended for longevity. Unlike typical disintegrators, the SSMD-2mm’s parts do not have to be replaced as frequently. In fact, several parts can be reused, rotated or adjusted to extend life before replacement is necessary.