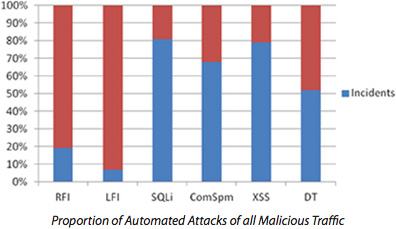 Businesses can reduce the risk of successful attacks against their organizations by identifying and blocking attack sources, payloads and tools that are found to target multiple websites or organizations.

These attack sources made up a disproportionate amount of the overall traffic against enterprise organizations in the report, and can be identified only by analyzing crowd-sourced attack data from a broader community.

“Our report shows that businesses can greatly reduce the number of successful attacks against their organizations by identifying and blocking attack sources that are known to target multiple sites or applications. We’ve found that these attack sources are responsible for a disproportionate amount – up to six times – of the attack traffic affecting businesses. The only way to identify these types of attack sources, though, is by sharing attack data among the community,” said Amichai Shulman, CTO, Imperva.

“This report highlights the need for early identification of these types of attack sources and payloads across a community of web applications, so that organizations can leverage shared intelligence to better protect themselves and reduce risk,” Shulman added.

Crowd-sourcing increases community protection against large-scale attacks. Multiple attacking sources and payloads gradually cover more and more targets, thus affecting larger parts of the community. Identifying a “noisy” attack source – an attacker, payload or tool that repeatedly attacks – is important. Security cooperation between organizations that suffer from Web attacks can create a “network effect” in which all members of the cooperating community can benefit by exchanging security and threat information.