A new WhiteHat Security report has correlated vulnerability data from tens of thousands of websites from more than 650 organizations, with software development lifecycle (SDLC) activity data obtained from 76 survey respondents.

In 2012, the average number of serious vulnerabilities per website continued to decline, going from 79 in 2011 down to 56 in 2012. Despite this, 86 percent of all websites tested were found to have at least one serious vulnerability exposed to attack every single day of 2012.

Of the serious vulnerabilities found, on average 61 percent were resolved and only 18 percent of websites were vulnerable for fewer than 30 days in 2012. On average, resolving these vulnerabilities took 193 days from the first notification.

A closer look revealed that: 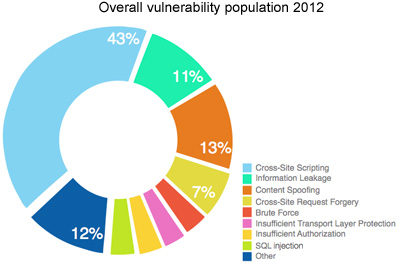 “Website security is an ever-moving target, and organizations need to better understand how various parts of the SDLC affect the introduction of vulnerabilities, which leave the door open to breaches,” said Jeremiah Grossman, co-founder and CTO of WhiteHat Security. “This report – comprising survey and website vulnerability data – is the first time we can correlate various software security controls and SDLC behaviors to vulnerability outcomes and breaches. The results are both insightful and complex.”

Best practices may not result in better security

In correlating the survey results with vulnerability data, WhiteHat Security could see how software security controls, or “best practices” impacted the actual security of organizations. Some of the findings include:

Some of this data implies that best practices such as software security training are effective, yet some of the statistics clearly show that following best practices does not necessarily lead to better security.

In the event an organization experiences a website or system breach, WhiteHat Security found that 27 percent said the Board of Directors would be accountable. Additionally, 24 percent said Software Development, 19 percent Security Department, and 18 percent Executive Management.

Should the organizations also provide software security training to its programmers and also perform static code analysis, Software Development was held most accountable in the event of a breach.

“This collective data has shown that many organizations do not yet consider they need to proactively do something about software security. It is apparent that these organizations take the approach of “wait-until-something-goes-wrong’ before kicking into gear unless there is some sense of accountability,” said Grossman. “This needs to change, and we believe there is now an opportunity for a new generation of security leaders to emerge and distinguish themselves with an understanding of real business and security challenges. Our hope is that they will address these issues we have identified and base their decisions on a foundation of data to improve the state of Web security over time.”