Motorola is trying to get back into the swing of things when it comes to innovation, and has been working on a number of fresh ideas regarding the future of authentication.

At the D11 Conference held this week in California, Google executive Regina Dugan (and former director of the Defense Advanced Research Projects Agency) who now runs a new Motorola research and development lab called the Advanced Technology and Projects Group, has shown – on her own arm – an electronic tattoo that is aimed to function as a wearable authentication device for, well, anything and everything.

Developed by partnering engineering firm MC10, the tattoo – dubbed Biostamp – is made of highly stretchable silicon, is applied with a rubber stamp or spray-on bandage material, and moves with the body. It contains electronic circuits, sensors, and antennae, and Dugan’s team is working on making it work as an authentication method. 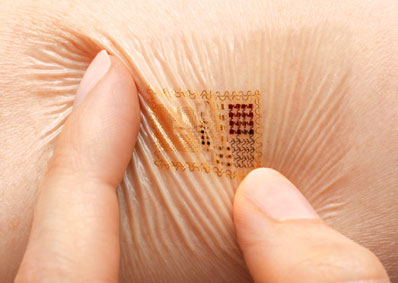 Initially devised as a way for health care workers to monitor patients’ health without having to be in the room with them – its sensors record data such as the patients’ temperature and hydration state – the good news is that the stamp is easily removable. In fact, if left alone, it will start coming loose by itself in a couple of weeks.

Another new solution that Dugan presented is an “authentication pill”. The Proteus Digital Health is aimed to be ingested and “switched on” by stomach acid, turning the users’ entire body into an authentication tool.

According to Dugan, the pill can be ingested every day for 30 days without any consequence to the health of the person. In fact, the pill has been approved both by the U.S. Food and Drug Administration and European regulatory bodies.

So far, the Motorola team has been able to make it work for phone authentication, but both the Biostamp and the Proteus Digital Health have still a lot of way to go before being used for authentication purposes.

The video of the presentation can be found here.