A “big” story like that regarding NSA spying was bound to be used by cyber crooks as a lure. So far, no emails containing links to booby-trapped pages or malicious attachments have been spotted, but Invincea warns that the Washington Free Beacon’s website has been compromised and is redirecting users to malware-serving pages.

Several pages on the website – including the index page and one sporting an article about the NSA whistleblower – have been injected with an iframe that points to a malicious domain hosting the Fiesta exploit kit (click on the screenshot to enlarge it): 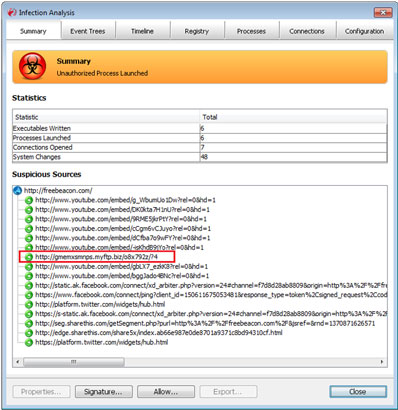 “This exploit appears to be the same as used against other media sites to infect readers of these websites and part of a concerted campaign against media sites to infect their visitors by exploiting vulnerabilities in Java,” the researchers revealed, adding that currently the great majority of AV solutions aren’t able to detect the toolkit and the exploit method.

The goal of the exploit is to silently drop the ZeroAccess rootking and an (also poorly detected) fake AV variant that goes by the name of Internet Security Pro.

The researchers urged users to run the company’s solution in order to be protect from such attacks, but also added that “patching Java to the latest version (if you can) may be your only (temporary) protection.”

UPDATE: The Washington Free Beacon has solved the issue and cleaned the website, which is now safe to visit.