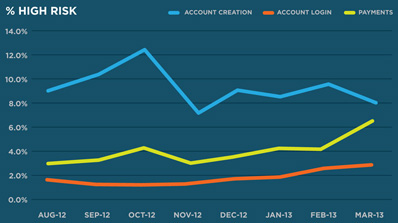 Nearly one in ten registrations for online services originates from a cybercriminal. New account registrations include applying for new lines of credit, creating a profile on a social networking site or marketplace and enrolling in an authentication scheme.

The most common form of stolen identities is by human or bot-generated fraud attacks directed through proxies and VPNs intended to disguise the true origin of the attacker. These bypass IP address-based geo filter blacklists that also have the downside of unknowingly blocking legitimate visitors.

The economic impact of these attacks varies by industry. However, the common thread is that without automated visibility into the true device, persona, relationship and global behavior, the only alternative is additional verification roadblocks put in front of legitimate customers and extended review and hold-out periods.

Payments fraud attempts, which include online credit card transactions and money transfers, increased from 3.1 percent to 6.4 percent over the six months ending in March 2013. According to Faulkner, several underlying trends help explain this dramatic increase:

Based on data taken from October 2012 through March 2013, they saw account takeover attempts nearly double (168%). These types of attacks have traditionally focused on banking and brokerage sites, but have recently escalated across e-commerce sites that store credit card details and SaaS companies that hold valuable customer data that do not yet have the heightened level of protection as banking sites.

ThreatMetrix has observed a rise in the sophistication of account takeover attempts using blended attacks to exploit companies that do not have an integrated solution for malware, device identification and bot protection. These include:

Multi-stage malware exploits: Malware, typically using Man-in-the-Browser (MitB) Trojans, is used to extract login and setup verification credentials from a customer that is then used by a separate device or third party to avoid server-side MitB detection capabilities.