The Twitter underground economy and the fake social account market as a whole continues to gain momentum, and the financial motivations of this multimillion-dollar business remain clear.

Since our first analysis and report, we at Barracuda Labs have continued to monitor this activity across multiple social networks. Twitter continues to be the largest offender (or victim) with its underground economy for buying and selling fake social accounts.

As part of this experiment, we once again began our investigation by searching on eBay, Fiverr and Google for vendors who sell Twitter followers. Then, we selected several of the vendors with varying price rates for purchasing followers, and spent about $100USD to make a few purchases.

After these followers were delivered to our controlled Twitter accounts, we used Twitter API to collect their information and conduct deeper statistical analysis.

Because the fake accounts are from multiple data sources, the resulting data characteristics are also different. For this purpose of presenting the results of this study, we selected one dealer who is most representative, sophisticated and interesting, and report the analytic results based on data collected from that dealer.

Similar to our previous study, we have organized the results into three groups: (1) Dealers (hackers or vendors who sell Twitter followers), (2) Abusers (Twitter users who bought or had fake followers), and (3) Fake Accounts (created by dealers for selling followings or tweets business).

Abusers (Twitter users who bought or had fake followers):

We compared these 62,982 fake accounts and the real accounts that are used for copy, and list several differences in the following table: 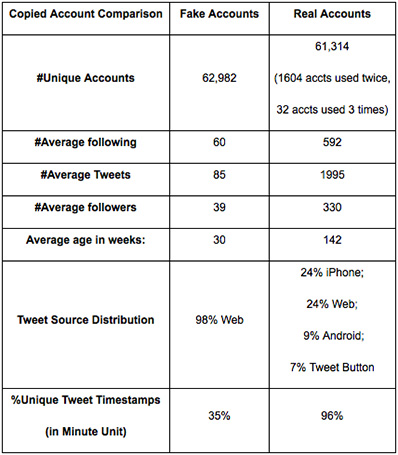 Clearly, the differences are quite big between the duplicated fake accounts and their corresponding real accounts. Most of these statistics look very reasonable (dozens of tweets, followers and followings), except for the last one. Real users may tweet at any time and most likely have no obvious trends; hence, the timestamps at minute level are most likely unique, as shown in our result: 96% are unique. Additionally, the Tweet source is diverse: 24% from iPhone, 24% from Web, etc. However, we found that these fake accounts generally tweet several times in a brief period of a day, and then disappeared for a few days, and come back again. Sometimes, these tweets were created so fast, e.g., 5 different tweets with 60+ characters in 1 minute, that they cannot be typed by a normal user, but only by machines. This characteristic leads us to estimate that the percentage of unique tweet timestamps should be lower: only 35% after our computation and 98% of them are coming from Web.

From here, we can easily deduce how Dealers (or hackers) control thousands fake accounts:

Clearly, this process can be implemented easily by a software program and run automatically on computers. Still, repeating the process of logging in, tweeting, and logging out, for thousands of accounts, will take a significant amount of time; hence, it generally will take a few days for an account to tweet again. (Of course, Dealers can spend more money and time to remove this tweeting characteristic, for example, using more machines to speed up the turnaround or tweet once in each login.)

Overall, we clearly can observe a new trend on the Twitter follower trading business: Dealers are getting smarter to make these fake accounts look more authentic.

Additional highlights of this study include:

This is not surprising as these services had publicly announced the basic features they used to detect each account’s identity, such as empty images, large following vs. follower ratio, or percent of retweets, etc. Dealers have taken advantage of this information and manipulated the new fake accounts to eliminate such features. This trend will force Twitter and other defenders to update their detection strategies to identify the real “fake” accounts and better protect real users.

Finally, we would like to estimate the size of this Twitter underground market. Without a doubt, it continues to be a multimillion-dollars market. First, a few vendors can sell up to millions of Twitter followers; secondly, we have found a few Abusers who have their followers up and down at the million level. We know on average each fake account is worth $0.011 or 1.1 cent per following, and it was on average following 60 users, meaning each account has already made 66 cents in our study. Remember that each of them can be sold at least 2000 times without any hurdles, worthy of $20 each. Therefore, millions of fake Twitter followers can definitely generate million dollars or more revenue.

Another reasonable estimation is based on statistics from fastfollowerz.com: declaring “28,000+” happy clients in hand and assuming each client only spend $50 (amount to have at least 4000 followers for the active group), and they have already made $1.4 million dollars at least for their Twitter follower business. Keep in mind that there are more than 55 websites, and 50 eBay sellers, and thousands of Fivvrr.com services.