51,000 new mobile malware threats were identified in the first half of 2013, infecting an estimated 21 million mobile devices, according to NQ Mobile. 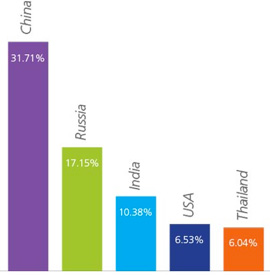 Highlights of report include:

“Our midyear report shows that although we discovered 51,000 new mobile malware threats, infection rates continue be very unpredictable and highly localized,” said Omar Khan, Co-CEO, NQ Mobile. “And as evidenced by the Bill Shocker malware we discovered in January which infected over 600,000 mobile devices, it takes just one successful piece of malware to create a local malware epidemic. Our best advice to consumers around the world continues: